In the previous posts I described an Reinforcement Learning approach to “Learning the Exit” part 1, part 2. My initial conclusions there have been:

In terms of improving RL performance, thought I could improve the information available to the agent by adding a feature that classifies the current price-action in terms of:

The goal for the RL strategy is to hold a position through a momentum or trend period in the direction of profit, and exiting when the features signal an end to momentum or a turning point in direction. I provided the model with a number of features that assist in this decision, however did not have a feature encoding any information that might be present in the “chart”. I am not a chartist, however there is undoubtedly information present in the price volume activity as seen in a chart.

I came across an article Identifying Candlestick Patterns using Deep Learning, which attempts to train a DL model to “become a chart reader”, effectively. The aproach:

The use of transfer learning, that of taking a trained vision model, stripping off the final layers and retraining a new set of final layers, was interesting.

However, I had the following reservations regarding the approach:

Rather than use an enormously complicated model, had the view that could create a simplified representation of a “chart” and apply classification. Like the above approach, I would present the prior K bars in some form as features to a ML classifier, providing indication of individual and overall geometry. Furthermore, I needed to address the labeling problem; avoiding noisy labels to the extent possible.

In terms of labeling made use of a variation of our labeler to label in the following manner: 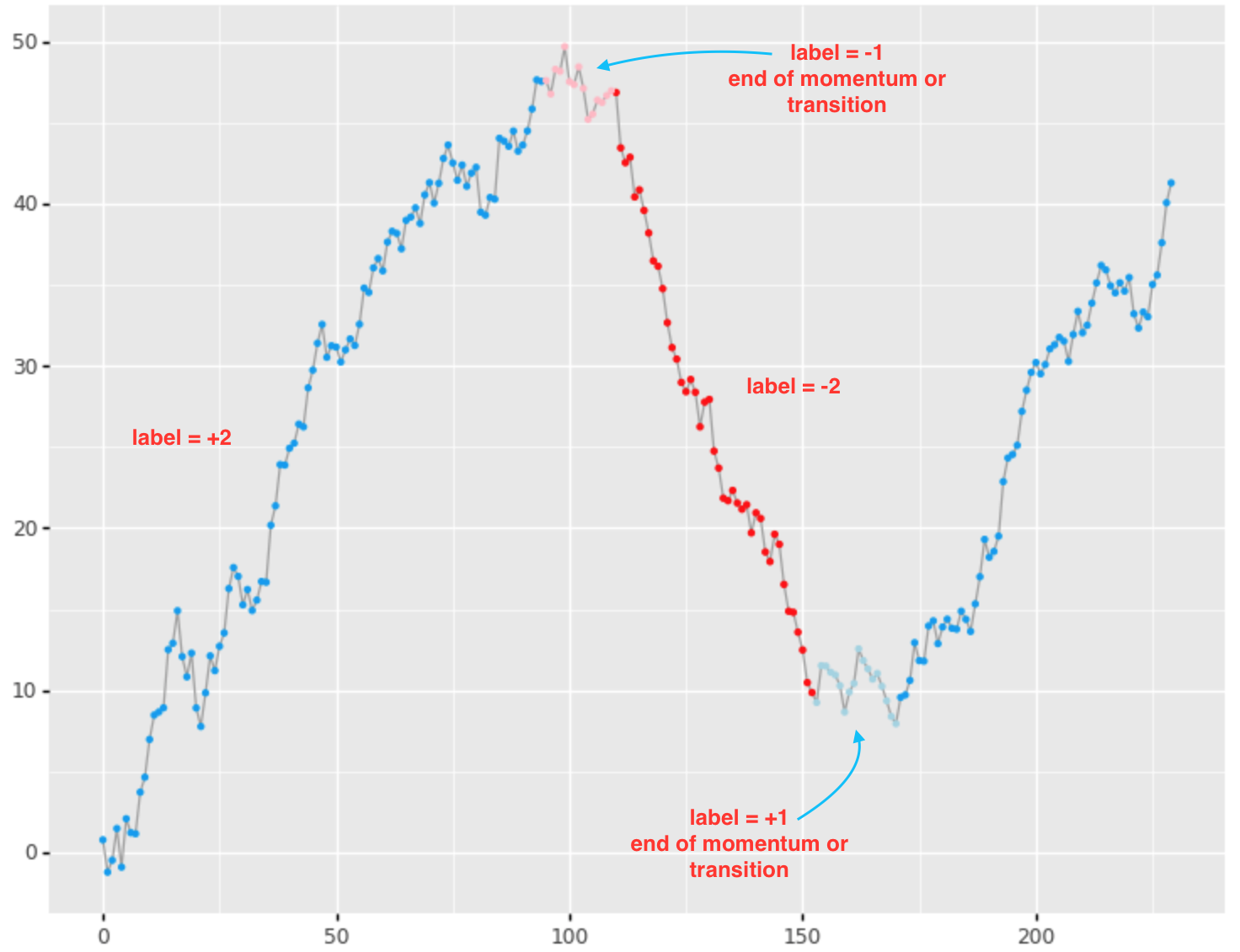 The next question was, what set of features captures the geometry of the chart pattern? I started with simple features, with the notion that could add more sophistication, as and if necessary:

Just as with the labeling, I used each asset’s ATR as a normalizer so that the same model could be applied across a portfolio.

where the diagonal represents accuracies for labels { -2, -1, 0, +1, +2 } respectively. I was surprised with the level of accuracy given the rather simple features. The transition period labels { -1, +1 } did especially well, which is useful. I took the same model and applied it to other equitie and it gave similar accuracy, which was reassuring.

A friend of mine (thanks Steve W.), suggested that I take the prior bar prediction and feed that into the model as a new feature. So for time \(t\), use the label predicted by the original model \(f(x_{t-1})\), augmenting the feature set and training a new model \(f(x_t, f(x_{t-1}))\). This improved the results significantly:

improving from 69% on the directional labels to 74%, as well as improving on the neutral and transition labels.

While the predictions are quite high, some thought is required in terms of how to use as a trading strategy in its own right. Correctly predicting the label for 1 min is not a return easily captured, and was not the intent of the labeling. The directional labels point to a bar belonging to a persistent market move, rather than being individually actionable. The transitional labels are likewise useful in identifying the end of market moves.

The end goal was to produce another feature that would assist the RL algorithm in determining optimal exit strategy. The signal can be used on its own however, taking into account the meaning assigned to these labels.