I have a model that indicates mean reversion with ~81% accuracy. Here is an example of a MR scenario the model identified: 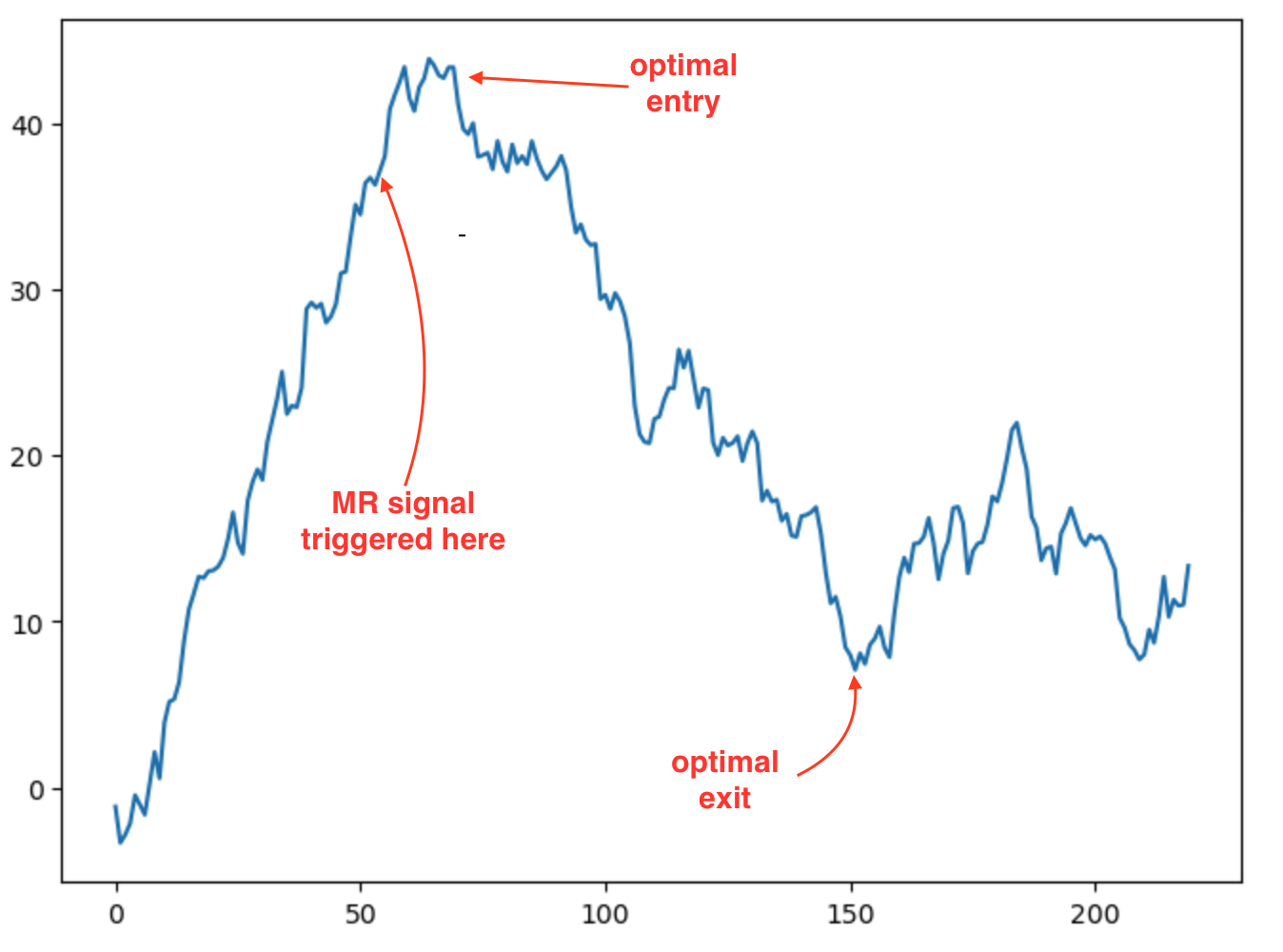 The strategy is very good at detecting entry points (usually very close to optimal), however is fairly crude in terms of how it determines the exit. Given that 81% of MR (with this model) experiences a profit of at least 25% of the prior amplitude, one could take the approach of waiting for a pullback of 25% less stop-loss.

While there are various profitable fixed stop-loss and profit target regimes for this model, using a fixed target ignores market information post entry. Here are some problems I want to solve:

We might start with a labeling approach using the Labeler to identity the target mean-reversion extent. The labels would indicate whether we should enter, build position, reduce, or exit. Given the labels, we can attempt to construct a ML driven model :

There are many great papers and tutorials for reinforcement learning, so will not go into great detail here. Our goal is to create a model that decides how to trade our MR exit. RL is framed as a markov process, where we progress from one state \(s_t\) to the next \(s_{t+1}\), based on the action \(a_t\) taken by a “policy function” \(\pi_{\theta}(a | s_t)\).

Given our entry signal, the policy function \(\pi_{\theta}(a | s_t)\) will propose an action \(a_t\) for each bar post MR signal, informing how to trade the prospective MR entry and exit. The actions it takes can either be discrete (for example Buy, Sell, None) or continuous (such as % allocation) in nature.

We learn \(\pi_{\theta}(a | s_t)\) by training the policy function across many “episodes”. In our case an episode starts with the MR signal at time \(T_{start}\) and ends within some maximum holding period \(T_{start} + \Delta T\). Reinforcement learning requires some form of feedback in order to effect learning, this is accomplished by assigning a reward \(r(a_t,s_t)\) for each action given a state. The learning process attempts to learn a policy function that maximizes the accumulated reward across episodes (roughly speaking).

Note that the above expression is only applicable to discrete action spaces. Q-learning was an early implementation of reinforcement learning, later superseded by a variety of more effective deep-learning based approaches, such as:

For example in the entry and exit scenario pictured here:

the optimal action sequence for an episode in our MR trading might be:

In the above example:

Breaking this down into sub-problems:

I will focus on the reward function in the next post.