Denoising a signal with HMM

Most signals I deal with are noisy, reflecting noise of underlying prices, volume, vol of vol, etc. Many traditional strategies built on such indicators might either: 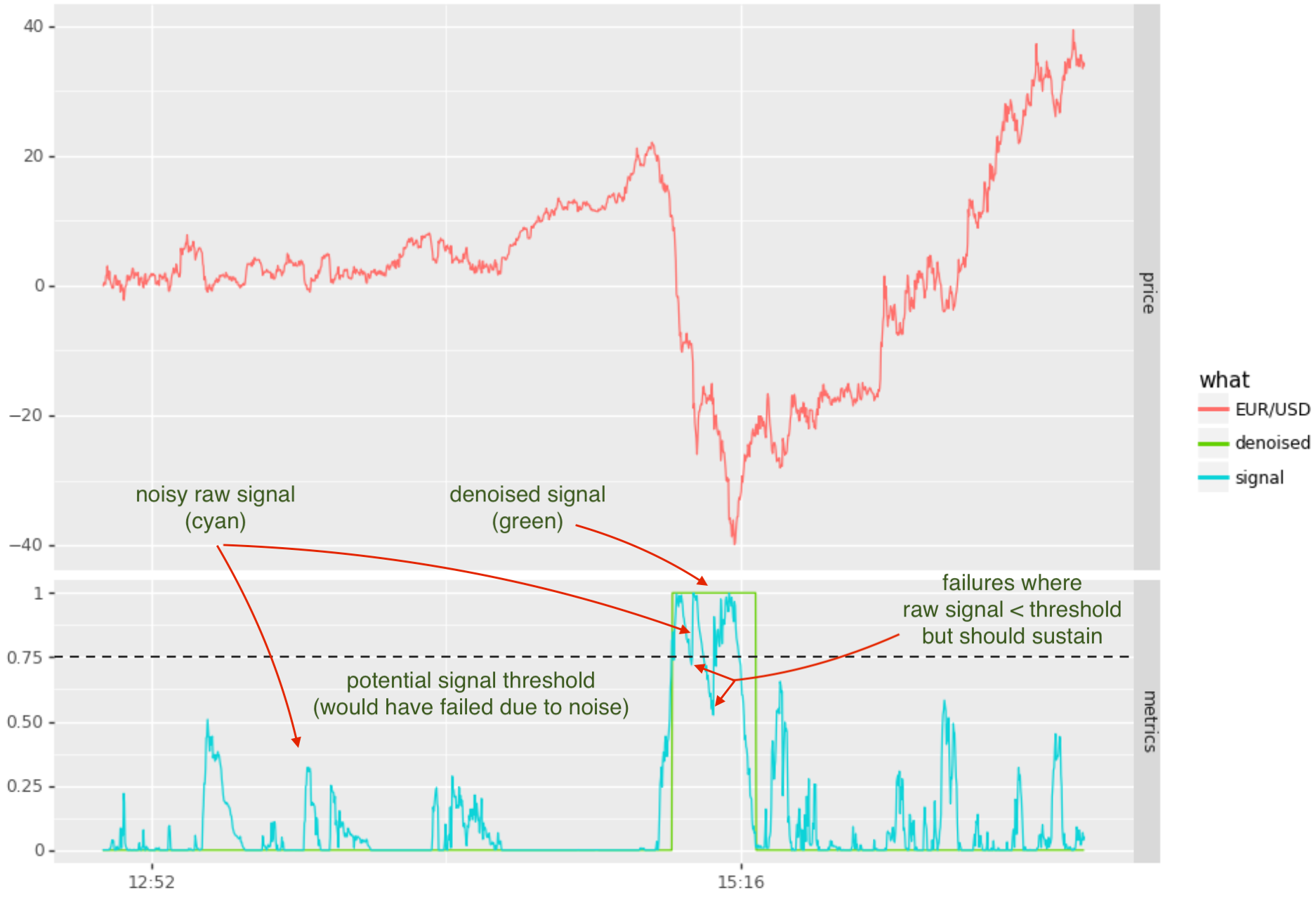 In the above scenario, there is no threshold level that would avoid unwanted oscillation between 0 and 1 states. For example, with the threshold set at 0.75 there are 2 incursions below the threshold (which would be mapped to state 0). Trying other thresholds, such as 0.5, avoiding noise during the momentum period, but would encounter noise thereafter.

The denoised signal (pictured as the green line), makes use of a hidden markov model (HMM). Have used this for the past 10 years or so, so thought to share the approach here.

In the application above we are interested in assigning states (or levels) +1 and 0, removing the noise from our signal. Let’s consider a common scenario where we want to assign { Short, Neutral, Long } states to a noisy signal.

To do this can construct a 3 state system and assign transition probabilities, for example probability of transitioning from Long to Short, Neutral to Long, remaining in the same state, etc. 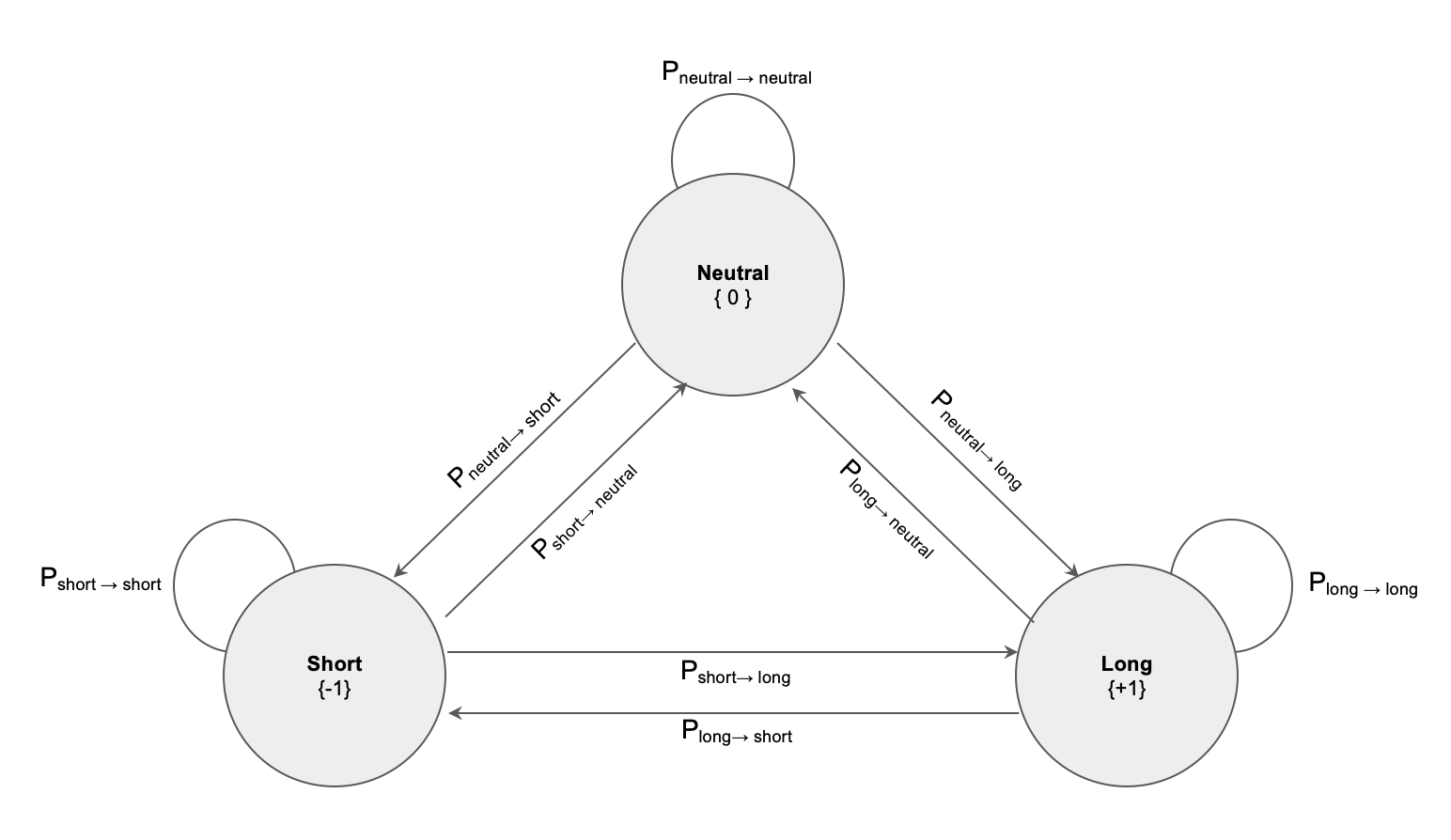 The state system above gives us a transition matrix:

and for a 2-state matrix as:

Next we need to consider how the (noisy) signal is mapped to these states. The approach taken by HMM is to introduce an observation distributions \(p(y \vert x)\), where \(y\) are our observations (the raw signal in this case) and \(x\) is the particular “hidden state”.

Our next step is to design an observation distribution for each state, providing separation such that the likelihood of \(p(y \vert x = s_i)\) versus \(p(y \vert x = s_j)\) are significantly different for signal values that should be mapped to state \(s_i\) versus state \(s_j\) respectively. In the example below I map a noisy signal into 2 states { long, short }, using normal distributions: 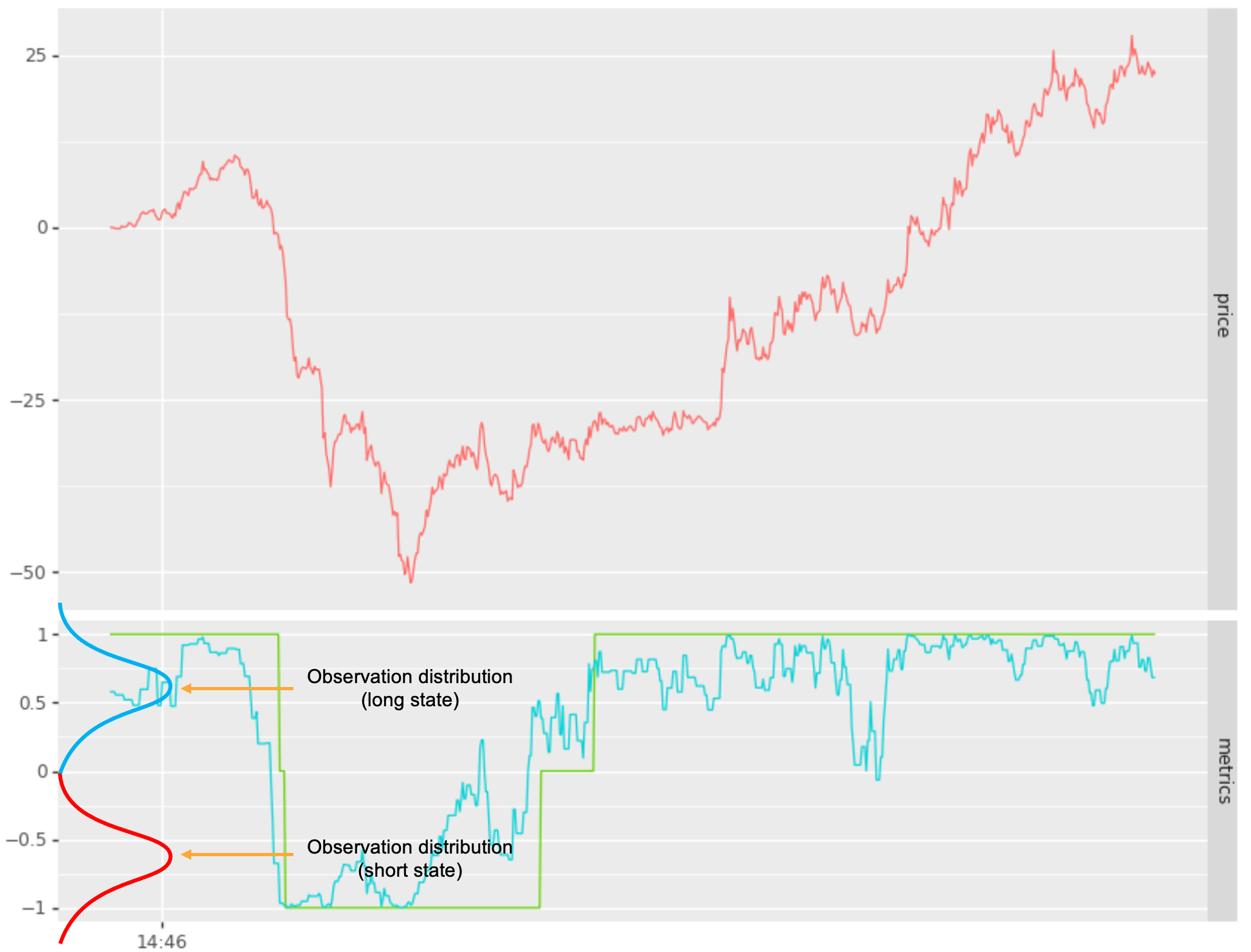 Tying it together with HMM

The HMM model ties the transition probability matrix \(M\), our observation probability distributions \(p(y \vert x = s)\), and state probability priors \({ \pi_{s = short}, \pi_{s = neutral}, \pi_{s = long} }\) into a model which determines the most likely state as we proceed along the sequence of observations. (The priors are typically determined as the frequency of each state such as 1/3, 1/3, 1/3).

As concisely described here, at each time step in the sequence we compute the likelihood of being on state \(x_t = s\) as:

The above is decomposed into a dynamic programming problem. The algorithm in pseudo code is as follows:

Note that the above would be restated in log likelihood space to avoid underflow and avoid having to compute the distribution CDFs.

In summary, the approach to mapping a Long / Short signal or alternative configuration of states is to:

Here is an example (which I did not attempt to optimise):

The above HMM2State class explicitly defines:

The forward viterbi method is then used to determine the states in the hmm.predict() call. HMM2State is a simple wrapper around the underlying scikit hmmlearn implementation that defines the model, bypassing the fit() stage. 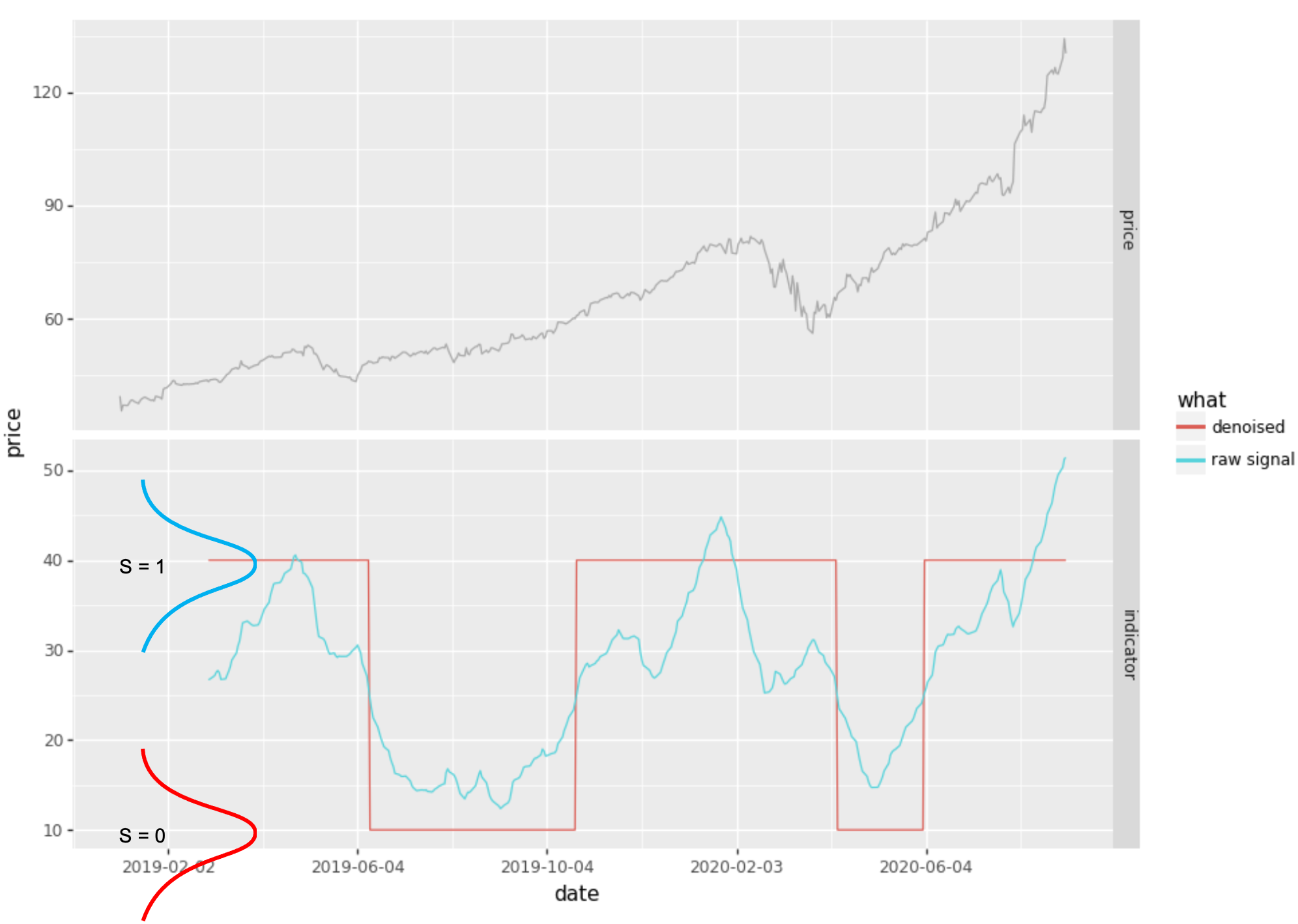 A typical approach with HMM involves using the forward-backward algorithm to automatically determine:

While this will find 3 states, is unlikely not to have the desired filtering effect:

In general you will achieve better results by defining the observation distributions and transition probability matrix yourself.