I am often confronted with the problem of trying to reduce a high dimensional feature set to a, smaller, more effective one. Reducing dimension is important for machine learning models as:

Assuming we are pursuing a classification problem, the objective of feature selection should be to determine a feature subspace that maximizes discrimination between classes and minimizes model complexity. Alternatively, we can express this as a minimization of:

Conceptually we could evaluate all (non-0 magnitude) permutations of the d-dimensional weight vector \(\vec{w}\) where weights are either 0 or 1, corresponding to enabling or disabling a feature. Some subset of features, expressed as 0 or 1 weights in \(\vec(w)\) will minimize the loss + complexity penalty.

Here are some approaches:

I have found that the distributional and model based approaches to be the most effective for my work. That said, will start by discussing subspace projections.

PCA is technique that finds orthogonal axes in a data set; the dimensionality of a data set can be reduced by selecting a subset of these axes, recombining to produce a feature set with reduced dimension.

PCA determines othogonal components in \(\mathbb{R}^d\) using the SVD decomposition of the covariance matrix, and determines d eigenvector / eigenvalue pairs, known as “principal components”. Each eigenvector defines an orthogonal axis in \(\mathbb{R}^d\) that aligns along maximal variance. The variance oriented alignment is easy to see in the decomposition of a 2-dimensional data set depicted below (source: Wikipedia): 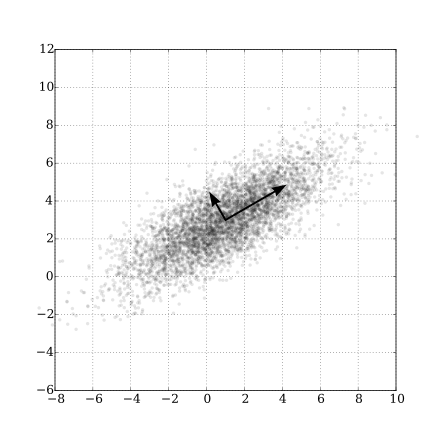 Dimensional reduction is achieved by selecting the k < d eigenvectors with the highest magnitude (variance). The original data can be reconstructed (with some error) from the k eignvectors with a linear combination.

However, PCA is rarely going to be an effective approach for dimensional reduction in machine learning data sets. There are two fundamental problems with PCA used in this context:

Consider the above figure showing the principal component decomposition of a 2 dimensional feature set. If we use PCA to reduce from 2 dimensions to 1 dimension, the eigenvector with the largest eigenvalue (the magnitude) would be chosen. In this case the vector aligned at ~30 degrees would be the selected vector.

However, this vector may not be aligned in importance with the underlying function f(x). In dimensional reduction we want to select components that align with the largest transfer function (f(x)) sensitivities. These will correspond to the partial derivatives of f(x) with respect to each feature (and not necessarily the variance of features).

By way of example, supposing we want to use ML to learn the following function:

While the above example was contrived, in practice I find that PCA often emphasizes the wrong features when performing dimensional reduction for my data sets.

LDA solves some of the problems of PCA, where instead of determining orthogonal components on maximum variance axes, determines components than maximize linear class-separation. Sebastian Raschka has written an excellent article on Linear Discriminant Analysis, contrasting to PCA . Borrowing a diagram from his blog: 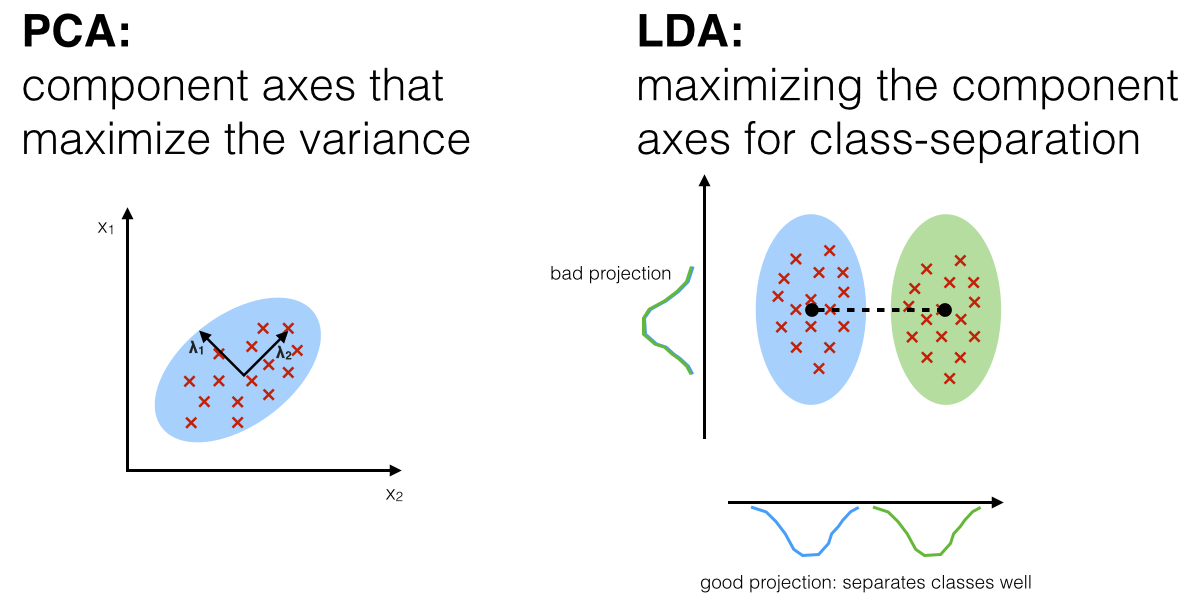 LDA will often perform better than PCA due to the explicit selection of components that maximize class separation. There are, however, some issues that may make it unsuitable for a given data set:

The idea is that we want to train the encoder to generate features in \(\mathbb{R}^k\) space, with fidelity to reproduce the d-dimensional features from the k-dimensional reduced feature set. 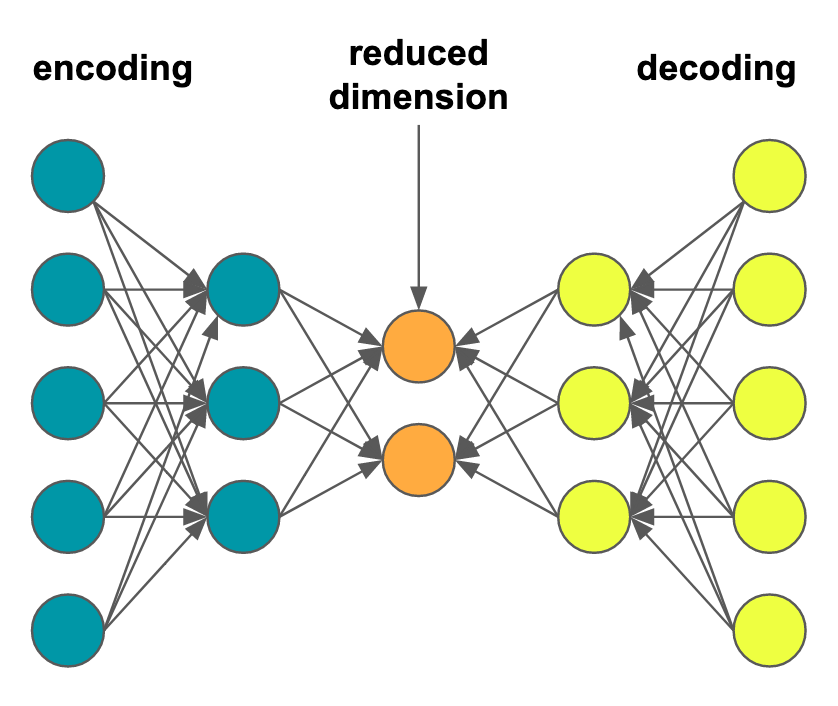 The network is trained on the same input and outputs, such that the hidden internal k-dimensional layer learns the optimal representation in \(\mathbb{R}^k\) sufficient to reproduce \(\mathbb{R}^d\) with minimal error.

While deep-learning ANNs allow for non-linearities (unlike PCA), auto-encoders also suffer from inability to classify the relative importance of features based on feature -> class fidelity.

Each approach has drawbacks and may or may not be suitable for a given data set:

Ideally we want a dimensional reduction technique that: