It is fairly easy to recognize price momentum with price-based indicators ex-post or with lag. Price based momentum signals tend to have lag issues in recognizing the start and end of a price move as there is a tradeoff between noise and lag [1] that can’t be defeated without future information (due to principles from signal processing).

[1] For those interested see impulse-response and the relationship between response delay and degree of smoothing by a filter. Zero lag smoothing with a traditional filter can only be achieved with Forward-Backward smoothing (using data from the future).

In lit markets (where we can see orders and trades), there is additional information that can be applied towards recognizing price moves (or at least directional trading):

In this case we will focus on trades. Most price moves above a certain magnitude will show skewed buying (selling) activity where the majority of aggressive crossing orders are in one direction. Some markets provide an indication of which side aggressed a specific trade:

There are many other exchanges which provide trades, however without buy/sell attribution:

Early research into buy / sell imbalance focused on classification of trades as buyer initiated or seller initiated. Probably the first published approach in this regard was the Lee-Ready technique (circa 1991), which made use of the position of a given trade’s price relative to a prior BBO mid-point to determine whether was likely buyer or seller originated. This was followed by a variety of alternative approaches, one of which will discuss in a later post. Here is a good reference to some of the approaches.

Trade volume tends to be clustered and is best modeled with a point process (in particular a Hawkes Process). The Hawkes process is a counting process that models the arrival of events over time. In this case would be used to model the arrival of unitary buyer or seller originated orders at time t. The process is “self exciting” in that each arrival (trade) excites the process, in the sense that the frequency and magnitude of subsequent arrivals (trades) is increased (and decays once new arrivals diminish). This is expressed as:

For our buy / sell indicator we will evaluate it as follows:

This is realized as:

Or as a recurrence relation:

The buy sell imbalance usually develops ahead of a visible price move, as trading drives price moves. If you have access to a full view of the market or a particular exchange where the move originates, should see an early indication of buy/sell imbalance, presaging the move. However, one may not have full visibility on the market, the visible slice will be a proxy for the overall activity behind the move.

In either case, I have found that BSI:

In this particular example, I did not have access to all trades across the market, just trades from one source (a market for Gold). The initial trading for this move started 5 minutes before the large drop (I believe), but most of it traded away from this market early on or was done passively. Hence BSI, here, only signals once the pace of trading becomes apparent on the futures exchange.

Find the code for this example in my new open-sourced timeseries patterns library tseries-patterns. 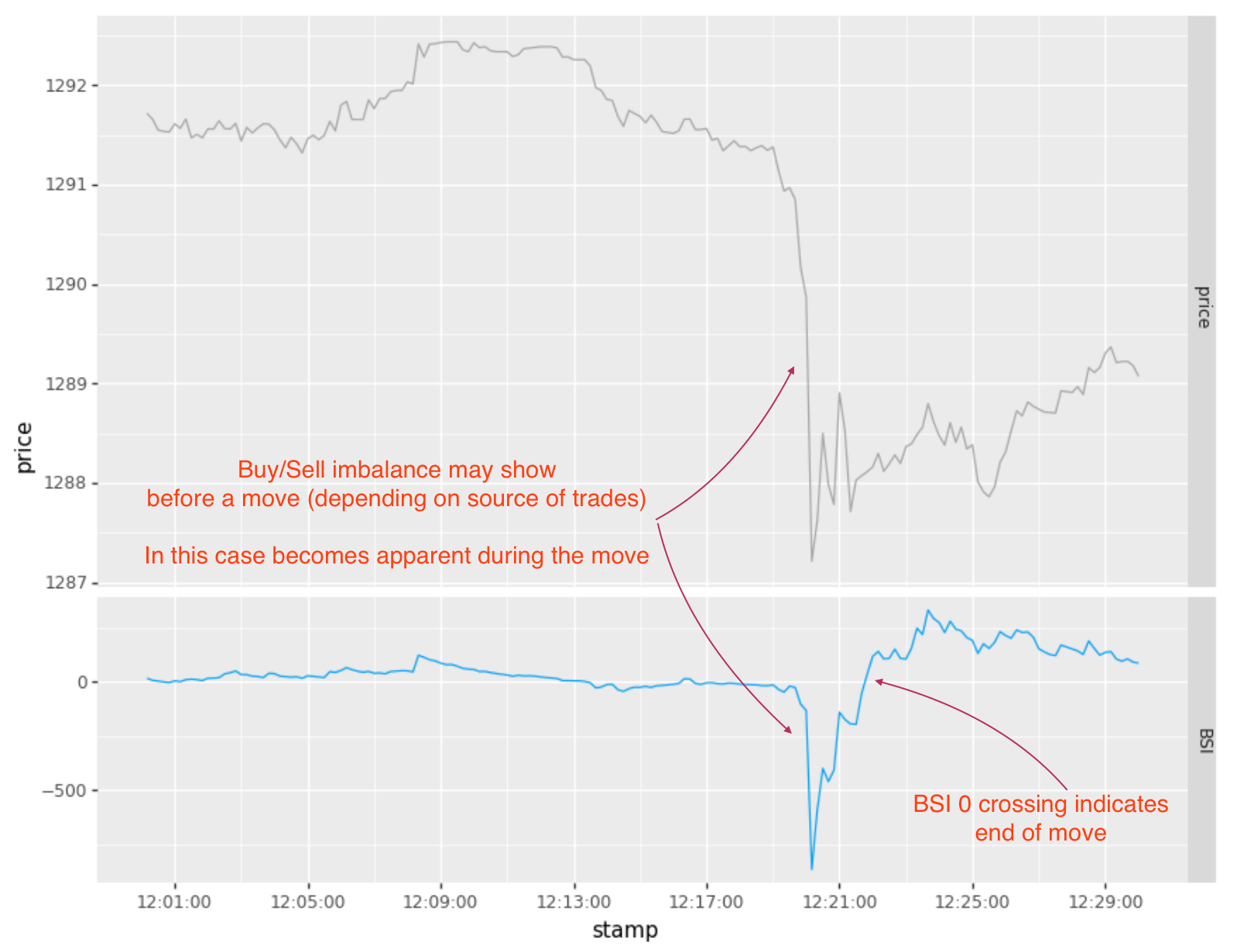 Here is the same time period with a faster decay: 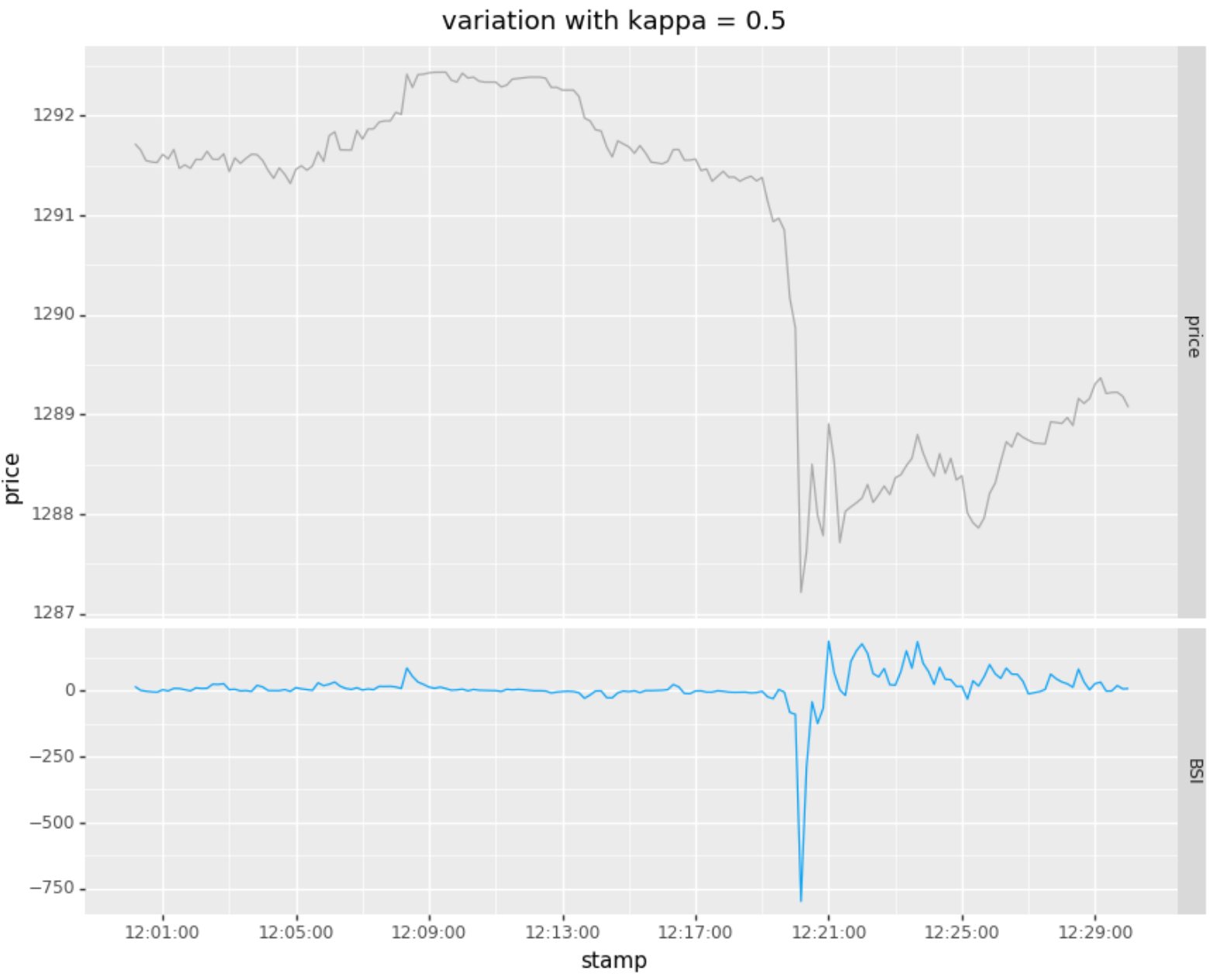 I have implemented BSI and variants thereof in C++, F#, Kotlin, and Python over the years. As mentioned above, have created an open source Python library, where am starting to share some of the indicators I use, called tseries-patterns. Will be adding to this library over time, so suggest watching the repository if is of interest. Appreciate any feedback.